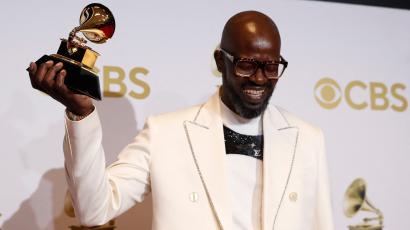 The event marked the first in which the producer was nominated or selected as a winner for this award, which fell under the dance/electronic album category for his 2021-released album ‘Subconsciously’.

The 12-tracker went up against other LPs such as Major Lazer’s ‘Music Is the Weapon (Reloaded)’, Illenium’s ‘Fallen Embers’, and Sylvan Esso’s ‘Free Love’.

Read this next: The 2022 GRAMMYs have been moved to Las Vegas

Also competing in the same category was Marshmello with his last-year released LP ‘Shockwave’, and Ten City who were nominated for their record ‘Judgement’.

“I want to thank God for the gift of music and being able to share it with the world and heal some souls and help people go through whatever they’re going through in life,” Black Coffee said when he accepted the award on stage.

The producer, who also brought his son on stage to accept the award, also thanked David Guetta for believing in him as a “smaller artist”, and trusting him and his ear for music.

Read this next: Black Coffee: “I’m carrying so many young hearts with me who are dreaming of doing what I do”

“I want to thank my fans and people who follow what I do all over the world, thank you so much for believing in me,” he said.

Elsewhere at the GRAMMYs, RÜFÜS DU SOL won an award in the category for best dance/electronic recording for their single ‘Alive’, released last year.

The group were competing with artists such as Bonobo, Caribou, James Blake, Tiësto, David Guetta, and Afrojack in the same category.

Foo Fighters picked up multiple awards under three rock categories, which comes shortly after the passing of their drummer, Taylor Hawkins, who died at the end of March.