BURN THE HOUSE DOWN: BALTIMORE’S HOUSE SCENE IS BUBBLING UP AGAIN

“Burn the house down! Burn the house down!”, a crowd of 100-plus is chanting with good humour after the speakers in front of them have blown, leaving just the monitors. One keen partygoer rings a cowbell, another shakes a tambourine and a man holds a laminated sign above his head: “House Music Lives!”. The energy remains buoyant while an engineer attempts to bring the system back to life. We’re in Baltimore and the response to this minor incident is typically improvised, the chants known by all, the instruments a regular addition to the party.

“These are typical Baltimore chants,” explains Andrew Grant, our guide and a well-known selector. Born and raised in the city, he moved to Europe after college and became one of the first residents at DC-10 in the early 2000s. Now back in the States, he’s proudly showing Mixmag around his home town.

It’s a Sunday afternoon and Louie Vega is headlining a pop-up party organised by local legend Teddy Douglas. They take over three floors at Montego, a Jamaican restaurant where they had to move the party last-minute after being oversubscribed with guest list requests just a week after it was announced.

Baltimore was once one of America’s key rave destinations. Nicknamed ‘Smalltimore’ by some, this blue-collar port city has a population of just over 600,000. Competition can be fierce yet friendly; everyone knows each other. Once, the steel and motor industries created thousands of jobs. Just 80 years ago it was the sixth largest city in the US, but when the bottom fell out of the steel industry the population dwindled. As with many cities that have been through a downturn, Baltimore is full of empty warehouse space which is now being snapped up by property developers. With almost 90,000 students there’s a strong arts scene due to the Maryland Institute College of Art (MICA), responsible for lots of public art, paintings and sculptures across the city.

As far back as the mid-80s Teddy Douglas was pioneering the house sound. His crew The Basement Boys were a prolific production team, pushing out a slew of tracks and remixes while performing all over the city and further afield. Their rework of Crystal Waters’ ‘Gypsy Woman’ was one of the first house videos to achieve commercial success, featuring on MTV back when the famous music channel launched.

Having one of Masters At Work in town brings out the grass-roots house-heads, and a queue snakes down the street before the doors have even opened. “Louie and I go way back,” Teddy explains when we meet the day before. He’s charismatic and disarming, with an infectious laugh. Every few minutes his phone receives another message about the Louie Vega party; clearly, half of Baltimore wants to be there. “I remixed his very first record, ‘Ride On The Rhythm’, for Atlantic when Masters At Work were just being formed. They were big fans of ours back in the day, so when the label asked who he wanted to remix the record, he said The Basement Boys. That was ’91,” he adds, that contagious laugh popping up again.

Teddy’s earliest appearances (as Teddy D) were at iconic Baltimore spot Odells, in 1984. Today, Baltimore has lost all of its most influential clubs: Odells, Paradox, Sonar, infamous gay club The Hippo and many more. “The main difference between then and now is that we don’t have any venues,” Teddy explains.

Huge promoters like Lonnie Fisher’s Ultraworld once dominated the larger end of the rave spectrum with events including StarScape Festival. Other local heroes include Lovegrove, who organised the city’s first big rave, Warehouse Rave 1. Boat parties in the harbour were a common occurrence. Record shops like Modern Music were hubs for the vibrant scene that attracted people from nearby cities and across the US. Rave buses would be chartered from Washington up to Baltimore to transport eager ravers to the city’s infamous parties.

Today, though, Baltimore’s small but committed dance music community keeps the old spirit alive. Teddy’s Monday Night Studio Sessions @ the Rockwell, which he launched in April 2017 with DJ Tanz, is packed every month. “Mondays bring out the real heads. It’s the start of the week, when most people aren’t even thinking about going out,” Andrew says.

Teddy and Tanz are on selecting duty, with Davon McCoy on live percussion and Charles Dockins on keys, plus a range of house icons, including Byron Stingily and Barbara Tucker, passing through. The nights run from 7pm until midnight and, judging by the footage, they’re raucous affairs.

The Louie Vega pop-up is much the same. The crowd is mostly made up of members of the city’s black population: older, dressed up and brimming with excitement. In typical Baltimore style there are speakers set up in various locations throughout the venue. The second and third floor are for dancing, with a bar on the ground floor. The atmosphere is unreal: singalongs, chants and uninhibited dancing create palpable energy, and Louie hasn’t even started yet. 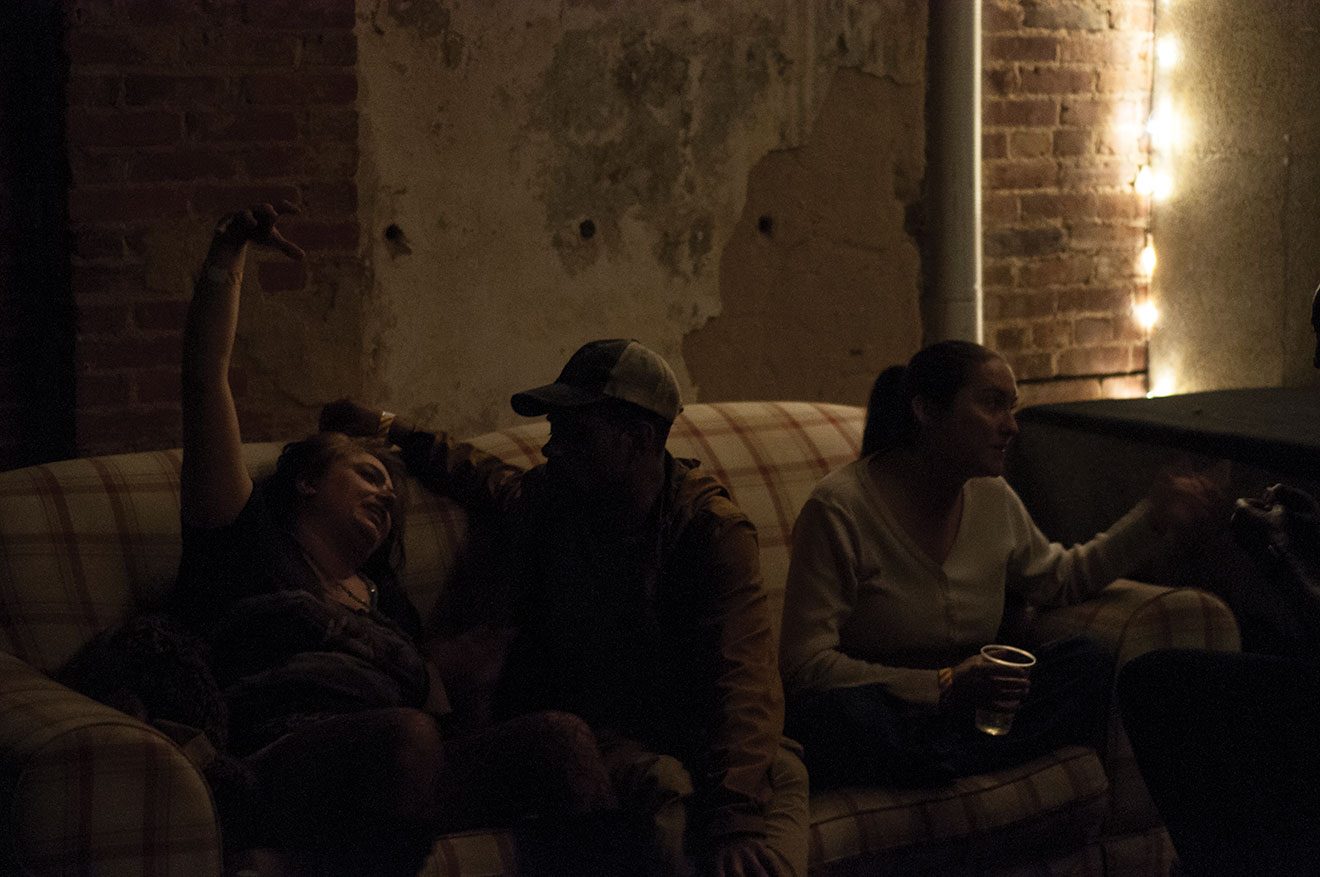 On the slightly more underground side there’s intimate warehouse spot Dark Room, run by 34-year-old Ebiz Kowli. The venue is in the cultural district, where you’ll find abandoned buildings alongside art museums and, increasingly, lots of construction work. Gentrification is beginning to make a difference, fuelled in part by the Hyperloop train system proposed by Elon Musk. Whether it will happen is uncertain, but talk of it is raising Baltimore’s profile. It’s a city on the verge of a new lease of life.

So far Ebiz has a mutually tolerant relationship with the authorities. “They want us to be here for now because it makes the area interesting. In three or four years that will probably change,” he says. “The main reason I moved to this block is because everything around it was abandoned. We could do whatever we wanted. The cops pop their head in sometimes to see what’s going on, but we’ve never had sound complaints.”

Dark Room is basic but functional, the DJ booth at one end, a small sofa at the other and not much else. It has a bring your own bottle policy so there’s no bar, just a separate chill-out room with a couple of toilets, another sofa and a smoking area outside. Its entrance is down an alleyway at the back of the building. The decks are on a wooden platform suspended from the ceiling by chains, and the soundsystem obscures the DJ. “I like to have a barrier there. Yes, the DJ is an important element of the night but it’s not everything,” Ebiz says. “I want people to dance and express themselves, not stare at the DJ all night.”

The only sources of light are the back room and a red lamp in the booth, echoing Kerri Chandler’s infamous quote about “A basement, a red light, and a feelin’”. The building that houses the rave space has four levels. On the second floor he’s building music studios, on the third floor his own apartment is being constructed and the basement will also be utilised at some point, with a cheeky afterparty room also in the pipeline. This is his baby, and the raw aesthetic belies how much work and attention to detail Ebiz has put into it. “Everyone who comes knows what’s going on; there are no walk-up ticket buyers. It’s a destination,” he tells us. This is confirmed by the dancefloor faithful. “I love drum ’n’ bass, mostly, but it’s hard to find that here or in Washington, where I live,” 28-year-old Andy tells Mixmag. “I come here because it’s a great alternative, the crowd is friendly, expressive and know their shit.”

“Most of my friends buy tickets to every party no matter whether they know who’s playing or not, because it’s always someone worth seeing,” says 33-year-old Christina, a receptionist.

Detroit heroes Scott Grooves and Norm Talley work through a broad selection of house, techno and soulful jams as the dimly-lit dancefloor throbs, writhes, bounces and flails all through the night. Like Teddy’s bash, it’s unrestrained, inclusive and communal, representing the core of Baltimore’s club scene – and the very fundamentals of the music itself.

Many thanks to Hotel Indigo and Visit Baltimore