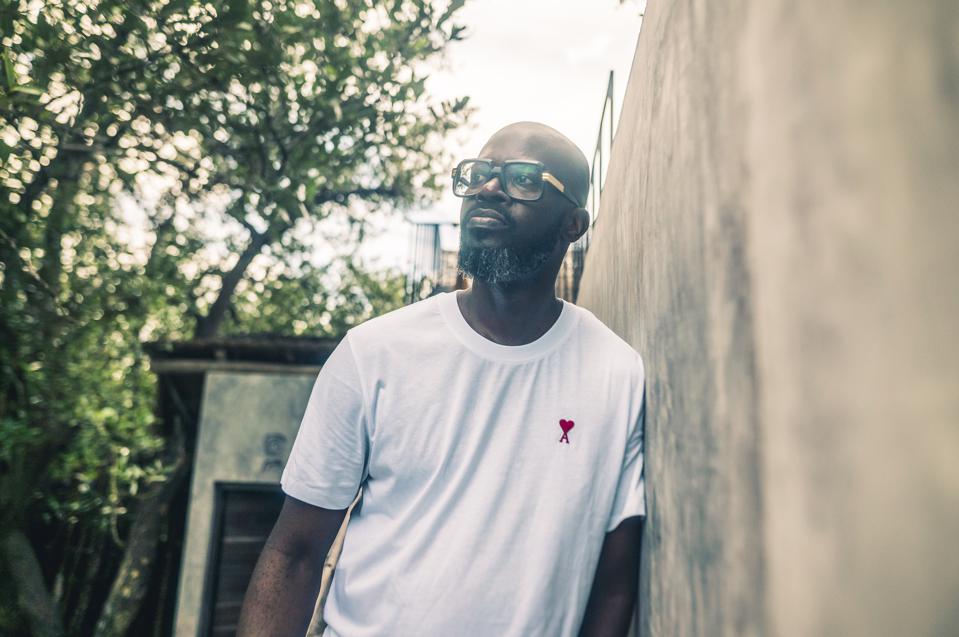 Nathi Maphumulo is best known to his fans as Black Coffee, a world-renowned DJ, and producer who is considered the godfather of South African house music. The legendary artist hasn’t released an album in five years until today, Feb. 5, as he releases his highly-awaited sophomore album, Subconsciously.

The 12-track body of work is texturally varied and sonically diverse, boasting everything from euphonious, emotion-tinged soundscapes to warm piano chords, deep house music, sultry melodies, hypnotic beats, soulful vocals, and more. Subconsciously also features an impressive lineup of collaborations with global stars, including Pharrell Williams, David Guetta, Diplo, and Usher. Indeed, the LP can be considered a career-defining album from one of the world’s most prominent producers.

Maphumulo’s illustrious career to date includes jump-starting the South African DJ scene and subsequently bringing his cultural perspective to venues and festivals around the world, receiving multiple awards for his debut album Pieces Of Me, launching philanthropic initiatives such as Africa Is Not A Jungle, and collaborating with renowned artists Drake, Alicia Keys and Solomun.

Here, Maphumulo took the time to share with Forbes the inspiration behind Subconsciously, his creative process, why charity is so important to him and more.

Lisa Kocay: What was the inspiration behind Subconsciously?

Nathi Maphumulo: “Usually when I work on an album, I stop everything and I really channel all of my energy towards working on it. With this album though, I had to pause numerous times to continue with touring and then come back to the music in between. Up until now, I’ve produced mostly pure house music albums. They’ve all been specific genre-driven projects. Over time though, I’m now in a space where I want to explore as much music as I can without being stuck in one genre. I want to do everything that I love. I’m a music fan first—even the music I listen to varies. I listen to so many different styles of music, and as a producer, too, I want to delve into producing different styles of music.

“Subconsciously is the first album where I’ve stepped outside of the house music-only approach whilst still remaining true to my roots. I still have my rhythms and I have my people on the album, and we all move together with the common goal of presenting who we are without trying to be anyone else.”

Kocay: The album is star-studded with collaborations, such as Diplo, Pharrell Williams and Jozzy. How were some of these collaborations formed, and can you share any stories on how some of the tracks were created?

Maphumulo: “‘SBCNSCLY (feat. Sabrina Claudio)’: We were doing a gig together in Los Angeles about two years ago, [and] Sabrina was performing and I was playing after her. That’s how we first met and started chatting about working together. Then our respective management teams started talking to get us in [the] studio together. Eventually, we got into [the] studio, and I started creating the beat while Sabrina was sitting there with a pen and a paper, and she just began writing. I always want any artist that I work with to express him or herself completely organically in the space we find ourselves when we work together. It should never feel forced. I think in this moment she was completely herself. I love her texture, her musicality, and how the song became what it is. It’s a very special song on the album, and it truly represents the quintessential Black Coffee sound.

“‘I’m Falling (feat. RY X)’: The song with RY X is something that I worked on completely remotely. We hadn’t actually met in person previously, but throughout the process we had numerous telephone and video calls discussing the project, talking through elements, and striving to hone the song into its best possible version. I’m a big fan of RY X’s artistry, song-writing skills, and his incredible voice. He was one of those people that I just instantly knew I had to make music with.”

Kocay: How did you pick the name of the album? What does Subconsciously mean to you?

Maphumulo: “Subconsciously the album title is taken from ‘SBCNSCLY’ the single, the song I did with Sabrina Claudio. I didn’t really have a title for the album itself, which is something I usually do. I usually theme my albums. This time around I didn’t have a concept, but when we did the song ‘SBCNSCLY’ with Sabrina I felt like that song represented a 2020/2021 version of Black Coffee. It’s the modern-day Black Coffee, and it represents what I’ve been doing musically, how the melody is written [and] how the song is produced. That’s why we decided it would be the first single and the title track of the album.”

Kocay: What’s your creative process like? Where do you find inspiration?

Maphumulo: “Previously, I would try to bring all these elements into house music, which is something I still love but I feel like there is so much more I can say with different tempos, collaborations, and artists. Sometimes I’ll have an instrumental and I’ll be low key looking for someone to sing on the song. And I’ll search until I find that one sound that I’m looking for. It’s always about the texture. What am I trying to say and what would be the best voice—the best sound to work on a particular song. It’s less about how popular or how well-known you are and more about what I’m trying to do with a song. The music always comes first. Inspiration comes from so many different places. It could be a mood, a thought [or] my surroundings—anything that connects and resonates with me in a moment.”

Kocay: How did you initially get into making music?

Maphumulo: “I started producing music while I was still in high school, but it was while I was studying music at Natal Technikon that things got more serious when myself and two of my friends and fellow music students Mnqobi Mdabe and Thandukwazi ‘Demor’ Sikhosana formed Afro-pop group ‘SHANA’ (Simply Hot and Naturally). We combined contemporary soul music with traditional African tunes over electronic grooves. Then SA pop queen Busi Mhlongo introduced us to famed Swiss producer and label owner of M.E.L.T. 2000, Robert Trunz. He signed us to his label in 1997. We went on to release four albums.

“For some reason, Robert really believed in my talent and gave me the opportunity to produce a record by myself. It was really in 2003 while working on my solo album that I was chosen as one of two South African participants in the Red Bull Music Academy in Cape Town, and that’s where I was able to really work on my production skills. I launched my solo career in 2005 with a remix of Hugh Masekela’s jazz and Afro-funk ballad ‘Stimela.’”

Kocay: In addition to making music, you’re also known for launching initiatives to help your country, South Africa. Most recently, you raised upwards of one million South African rands since launching your weekly Home Brewed live DJ streams in April. Can you discuss some of these initiatives and why charity is so important to you?

Maphumulo: “It’s at times like these that as human beings we really need each other—even if you can donate just R10 to help someone in need—we need to stand together and do whatever we can for each other. We ran my Home Brewed live stream sessions for a number of weeks during the lockdown. Each week we chose different relief charities/NGOs to fundraise on behalf of so that we could extend help across more than just one area of need. All in all, we managed to raise over half a million South African Rand to aid organizations, such as the Solidarity Fund of South Africa, Save a Business, KFC’s Add Hope, the Red Cross Society, CoronaCare for SA, Gift of the Givers and FoodForward SA.

“I was also part of the line-up for the Global Citizen One World: Together at Home virtual relief concert held in support of the World Health Organization’s COVID-19 Solidarity Response Fund and the healthcare workers fighting the pandemic across and the globe. Together with Delilah Montagu, we gave a special performance of our chart-topping hit song ‘Drive,’ which we created along with David Guetta. The event also featured performances from fellow South Africans Cassper Nyovest and Sho Madjozi, and [it] went on to raise $127.9 million.”

Kocay: What are your plans for the future?

Maphumulo: “Well, as you know my album Subconsciously drops on February 5th. I’m really happy that release day is just around the corner. It’s been a long time coming with this project, which is especially dear to me. I’ve also been working hard on various other ventures, including Flightmode Digital, my angel investment company and the streaming platform Gongbox that I’ve had in development for a number of years. I’m happy to be able to report that the launch of Gongbox is imminent, too. And it goes without saying that all of us in the music industry are fervently hoping that with the roll-out of covid vaccine worldwide, we might all be able to return to some semblance of normal life in 2021 and that live event and touring for music artists and DJs will somewhat resume.”

Lisa Kocay is a journalist interested in music, food, wine, spirits, travel, and architecture, and she covers those interests for ForbesLife. . Full-time, she works as a content management coordinator at Royce Investment Partners, where she delves into the world of small-cap investment. She’s a graduate of Columbia University’s Graduate School of Journalism and Lehigh University. You’ll most likely find her at a concert or trying new restaurants. Follow her on Twitter (@lisakocay) or visit her website (lisakocay.com)